Joined Nov 9, 2017
·
1,042 Posts
How much has the Escape improved with the 8 speed? The Edge ST owners don't like the 8 speed compared to the 6 speed on the same car known as the Edge Sport. The 2 extra gears are worthless for acceleration. The extra OD night help with fuel economy but Ford could have done that with the 6 speed and a more logical final drive like 2.77s instead of 3.16s

An additional benefit this improved transmission can offer is extremely smooth shifts that happen so quickly they often cannot be sensed by the driver. They also offer great advantages to the power enthusiast as they can handle over 650 ft.-lbs. of torque! Weighing only 200 lbs. these new units offer a great mix of power and efficiency.

But you didn't mention the 2020 is lighter and has a bit more power.

The 8 and 9 speeds add extra OD gears which will give you a boost in fuel economy but there's extra shifting involved which slows you down. The 2-3 is ridiculously short in the 8 speed. Each shift takes about 0.25 seconds to complete.

Joined 2 mo ago
·
56 Posts
The zero to 60 times comes from the zero to 60 website.
I suppose Audi, BMW, Mercedes, and a host of other car manufacturers (just about all 2020 models) should have stuck with 6 speed transmissions and changed their final gear ratios instead of updating their transmissions.

Have a nice day!

Joined Nov 9, 2017
·
1,042 Posts
So I believe the story behind "GM's" 9-speed on the Traverse is that they added 3 gears to the 6F50 or 6F35 for a smoother driving experience and better fuel economy. Ford found they could get the same mpg goal with just 8 gears and took 1 of them out. The Ford Edge ST takes the 6F55 and adds 2 extra gears, but if you map out the OSS vs engine RPM or watch an onboard WOT run, the 2-3 is ridiculously short like almost unnecessary. So you just wasted an extra shift in their for no real good reason. The Ford 10R60/10R80 gearing is also almost just as bad. There are at least 2 gears that can be skipped AND keep an EcoBoost 2.7/3.0 V6 in its powerband at WOT (above 4k RPM) but instead you deal with ridiculously short gears and waste time with 2 shifts.

Adding an extra gear or 2 for better MPG makes sense, because you can spread out the gearing towards the numerically higher gears to prevent lugging. One of the killers of fuel economy is cruising at 75-80 mph w/ the A/C on and having your engine screaming at 2500-3000 RPM. The girlfriend's 2015 Malibu LTZ w/ 2.0 LTG GTDI has 2.77 final drive and the 6T70 gearing is basically the same as the 6F55. At 80 mph, it is below 2000 RPM. I'm not surprised we were getting 30-35 mpg on a cross the country trip (5000+ miles worth of driving) even going up/down the mountains in Colorado, Wyoming, Idaho and Montana. I see that carry over in the Camaro SS with 2.77 final drive and getting like 27 mpg highway, versus Ford Mustang GT with 3.15 final drive standard with 3.55 optional and 3.73 on the track pack. It makes more sense to get a Camaro SS for a grand touring car as it has usable range thanks to its better fuel economy and larger fuel tank. The S550 Mustang GT gets like 3-4 mpg lower than the Camaro SS and a smaller fuel tank.

Anyhow back to the Edge ST vs Edge Sport. Here's Car and Driver and Motor Trend basically saying the older Edge Sport with the 6F55 was faster:

The new Ford Edge ST, then, is not a big, blue, all-wheel-drive Fiesta ST but instead an Edge Sport with better brakes and a hooligan mode.

With five trim levels, four eventual powertrains, and a raft of smart features, Ford's redesigned top-selling SUV is much improved.

2020 Ford Escape Review: Is This CR-V-Fighter a Good Car?

Finally redesigned, the 2020 Ford Escape crossover is ambitious and charming, but this isn’t a picture-perfect story.

If you look at the 2017 Escape Titanium test: 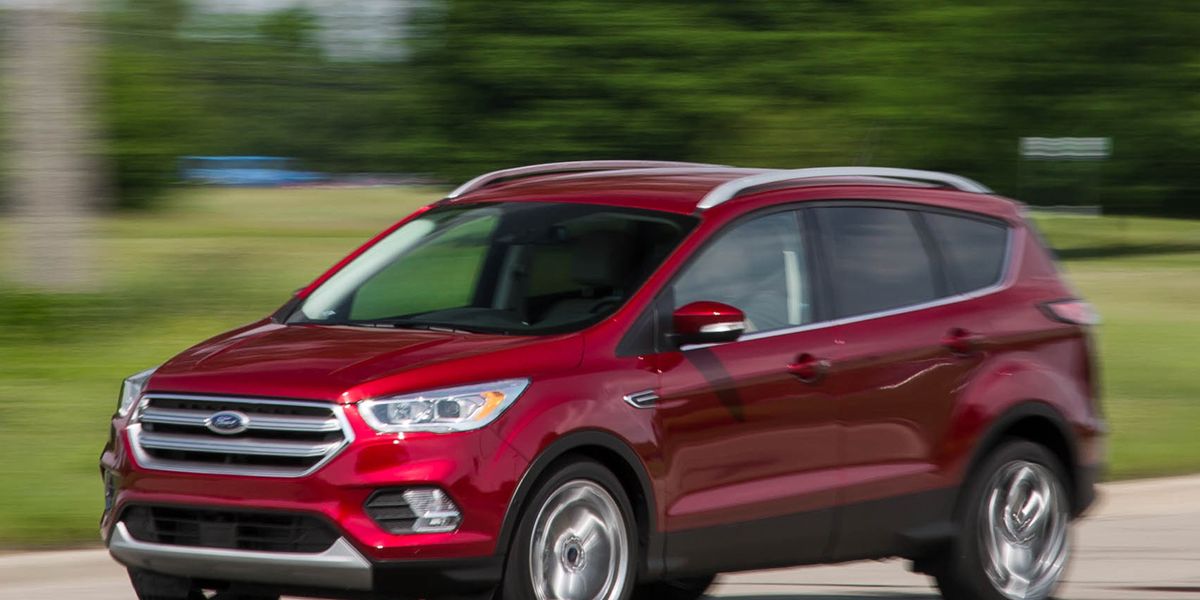 Big on power, features, and price.

But my point was that the 2 extra gears in the transmission isn't responsible for faster acceleration. The idea is to keep the engine in its powerband during WOT acceleration, or for a smoother driving experience. But with turbochargers, like the EcoBoost V6s we have, make most of its torque above 4k RPM (3k for the 3.5L) which the 6F55 does perfectly fine. The 8Fxx messes things up with that 2-3, and if you skip one of those gears on the 8Fxx, you are screwed because you end up in the wrong RPM. On the 10R60 with the Explorer ST, you can actually skip 2 of the gears and still be always at or above 4K RPM at WOT. More gears makes sense if applied correctly for the right reasons. Lately, it seems Ford just doesn't give a sh*t and throws stuff out into market. Their programmed shift schedule for the 11-19 Explorer's 6F55 was not set correctly.
G

Joined May 31, 2016
·
58 Posts
I have a 2017 FFS, my wife has a 2019 Accord Sport 6-speed. The Fusion pulls way harder from a stop and is the better highway car due to noise cancellation, better audio, and overall comfort featured The Accord is a hoot to drive for the tighter suspension, lower weight, lower center of gravity (I swear I'm sitting 2-3" lower in the Accord and my knees agree when getting in/out), and the stock blow off valve makes a sweet whoosh sound on shifts that you don't get in the Fusion.

I like to play in the Accord every now and then to bring the kid out in me, but prefer the Fusion for daily driving and surprising people at red lights.
G

Joined May 31, 2016
·
58 Posts
I'll add that the Accord does pull very strong at WOT once the boost builds. It's very planted for FWD, just not from a dead stop. It also takes longer than the Fusion to get the turbo working for whatever reason - I assume the Accord turbo is larger than either of the Fusion turbos which adds to the perceived lag.
21 - 27 of 27 Posts
Join the discussion
Continue with Facebook
Continue with Google
or sign up with email
Recommended Reading
Read More
Read More
About this Discussion
26 Replies
15 Participants
Last post:
GFunk 2 mo ago
Ford Fusion V6 Sport Forum
A forum community dedicated to Ford Fusion owners and enthusiasts. Come join the discussion about performance, modifications, ecoboost, classifieds, troubleshooting, reviews, maintenance, and more!
Full Forum Listing
Explore Our Forums
Fusion V6 Sport Performance Ford Fusion V6 Sport General Discussion Engine and Technical Discussion Fusion V6 Sport Audio, Electronics, and Lighting New Member Introductions
Popular Communities